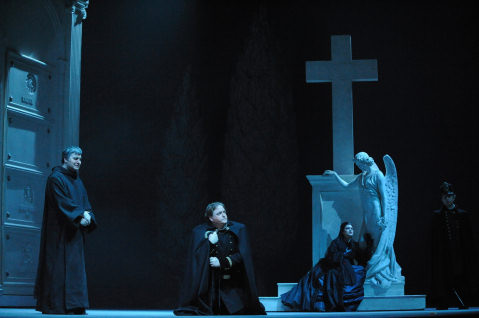 ABAO (Asociación Bilbaina de Amigos de la Ópera) continues its Tutto Verdiproject and on this occasion presented one of the least performed operas by the Busseto composer. I am referring to Aroldo, a revision of Stiffelio, the opera that precedes Rigoletto.

Aroldo is an exception among Verdi’s operas, since it is the only case where the revision has not surpassed the original. In all the others the revised versions have completely superseded the original - Macbeth, Simón Boccanegra, La Forza del Destino and Don Carlo are clear examples of this, although there is more doubt in the case of Jerusalem/I Lombardi. Aroldo is hardly performed at all, whileStiffelio, although we cannot consider it as part of the main repertoire, is not such a rarity.

From my point of view the dramatic power of Stiffelio is greater than that ofAroldo, particularly in the final scene. The impact of the public pardon by Stiffelio in the church is far more powerful than the more intimate conclusion in the case of Aroldo. Without a doubt, the great Verdi tenors have always realized the value of this final scene and have been willing to take full advantage of its possibilities. The recent performances by Placido Domingo, José Carreras and, more recently, José Cura are extraordinarily revealing. Aroldo, lacking this scene of the public pardon, has much less dramatic impact, but even so, it is a praiseworthy initiative on the part of ABAO to offer this Verdi rarity. 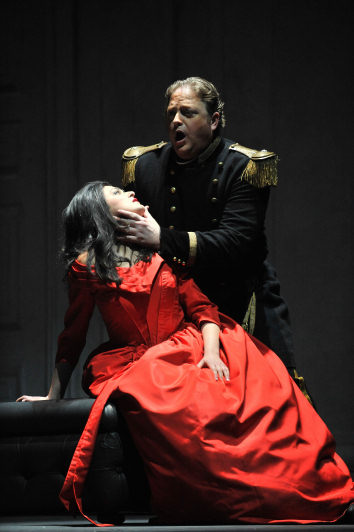 This production is directed by Pierluigi Pizzi and was premiered at Piacenza in October 2003, although in fact it is a kind of recycled work from an older Pizzi production, which was seen in Venice in December 1985, when Stiffelio andAroldo were given on the same day. As in the Venice production, the action takes place in the 19th century rather than during the Crusades. The sets are simple, consisting of a library, a cemetery, the library again and a last scene in an open space, and has all of the traditional good taste of Pizzi’s works, with elegant costumes mostly in black.

In Pizzi productions the stage direction is not particularly important andAroldo is no exception to this. The opera started in a promising way, with Aroldo in a wheelchair, which made it seem as if Pizzi was giving a new perspective on his wife Mina’s infidelity. However, this was only an ephemeral detail, since after five minutes Aroldo had left the wheelchair and, during the second part of the opera, didn’t even need to use a cane to walk. This Pizzi production appeals to a traditional audience and, at a time when opera houses cannot afford to take many risks on new productions, this caution can easily be understood.

Antonio Pirolli was making his debut at ABAO, and gave a very good reading of the work. He is not the most famous of conductors, but his interpretation was excellent. He showed a deep knowledge of the score, conducting with strength and conviction and an excellent control of both stage and pit. The Euskadi Orchestra was much better than in the recent past and was by far superior to the Bilbao Orchestra in Carmen last month. The Chorus continues to be one of the main assets of Bilbao opera, particularly when performing Verdi.

To cast Aroldo himself brings up the immediate problem that the big names are not willing to add this opera to their repertoire, knowing that they will probably never have the chance to sing it again. In this case, the protagonist Aroldo was played by American tenor Michael Hendrick, who made a very good impression as Laca in Jenufa some six years ago. My opinion is that he gave a worthy performance, singing with great honesty and commitment. His voice is short in brightness and this is an important handicap when singing Verdi, and I believe that he would be better suited to a different repertoire. Captain Vere or even Peter Grimes could be excellent for him.

Adriana Damato is still a young soprano, who looked as if she was at the beginning of a most promising career when she made her debut some six years ago. Probably the highlights of her career are her Mina in Piacenza, replacing Daniela Dessì, and Gulnara in Verdi’s Il Corsaro one year later in Parma. Today Adriana Damato retains both her Verdian temperament and a well pitched and powerful high register, while her lower notes have become too weak, to the point of being almost inaudible more than once. If her low notes were better, she could be excellent in the big Verdi roles.

The success of the evening was the Bulgarian baritone Vladimir Stoyanov as Egberto, Mina’s father, who is looking for revenge in defence of his honour. Stoyanov has never been a true Verdi baritone, but he is an outstanding singer, with an elegant line and exceptional phrasing. At one time his biggest problem was projection of the top register, but this aspect has much improved in the last couple of years, as could be clearly appreciated in his last performance in Bilbao in Donizetti’s Poliuto. His performance as Egberto was the best of the evening, particularly his beautiful Act III aria, although he had some problems in the cabaletta that follows.The Russian Stanislav Shvets was an outstanding Briano. The voice of this young bass was a luxury in this brief but important role.Maurizio Pace was not convincing as Godvino, being too short of expressiveness.

The Palacio Euskalduna was full as usual. The audience gave a very warm response to the artists, especially Stoyanov and Maestro Pirolli.All in all, this was a most interesting revival.